Palermo Palermo is a big city and not just for its 640,000 inhabitants (fifth place in Italy for the population), but for its history, its monuments, the crucible of the people who are integrated in the millennia in this city. It has a great tradition of […]

Palermo is a big city and not just for its 640,000 inhabitants (fifth place in Italy for the population), but for its history, its monuments, the crucible of the people who are integrated in the millennia in this city. It has a great tradition of racial tolerance, religious and why not cooking! In fact several recipes, dishes, sweet or street food come from very distant peoples from this city, but that over time they put their roots in Palermo, especially Arabs, Normans, Spanish, French, and British .

The city of Palermo has the largest historical center of Europe, and proudly displays the testimonies of its glorious past through the grandeur of its artistic and architectural heritage. In the town coexist in harmony Arab domes, churches from the Baroque, Art Nouveau buildings, neoclassical theaters, eighteenth green spaces and lively historic market, similar to Arab souks.

So, among countless millenary monuments, churches of a unique and exclusive beauty, food (especially the pastry) of international level (exported and imitated around the world), the mild climate and the sea almost Caribbean, and finally the hospitality people, certainly the tourist in Palermo do not get bored!

What to see in Palermo 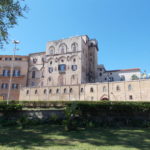 Palermo Palace of the Normans

The building is located above the first Punic settlements, traces of which are still visible in the basement. The first construction is attributed to the period of Islamic domination of Sicily. The Normans sovereigns expanded and transformed the consolidating building with the construction of four towers became the main fortress of the city. The Norman Palace is also known as “Royal Palace.” Roger II was that, having received the crown of Sicily in 1130 transformed the building into a sumptuous palace in the center a beautiful chapel, the Palatine Chapel. With the decline of the Swabian dynasty building lost importance, but in the ‘600 Spaniards turned it again, bringing down the towers and adapting it to the residence of the Viceroy. The Royal Palace is the oldest royal residence in Europe, and since 1947 is the seat of the Sicilian Regional Assembly.

And ‘the church of the royal family, adjoining the palace is decorated with splendid Byzantine mosaics, considered among the most beautiful in Sicily, and with the wonderful wooden ceiling stalactites. Construction began in 1130 and consecrated in 1143. The mosaics entirely occupy the highest parts of the walls. 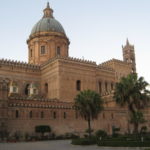 The Cathedral of Palermo

Extraordinary historical monument not only from the architectural point of view, it was built in 1184 by Archbishop Walter of the Mill, where there was already an early Christian basilica (604), transformed into a mosque by the Arabs (831) (and subsequently, precisely with the building of the Norman Palace, returned to Christian worship (1072). renovations and restorations carried out over the centuries they have changed the original appearance. the interior was rebuilt to a design by Ferdinando Fuga between 1781 and 1801 in a neoclassical style it has a Latin cross with three aisles. Here there are the remains of the real Sicily, including Frederick II and Roger II, those of Henry VI, the sarcophagus of William, Duke of Athens, and those of Santa Rosalia, the patron saint town. Other tombs in the crypt dating from the sixth century. you ‘can also admire the golden tiara of Queen Constance of Aragon, along with other precious objects found in the real tombs.

Built in 1143 at the behest of George of Antioch, Admiral of Roger II, the St. Mary’s Church, entrusted in 1221 to the greek clergy, is also known as the “Martorana” because it was given in 1433 by King Alfonso d ‘Aragon to the Benedictine monks of the nearby monastery founded by the noblewoman Eloisa Martorana. Despite the changes made in the sixteenth and seventeenth centuries, the building retains its original Arab-Norman style. The inside of the church at the top of the walls, in the soffits and the magnificent Byzantine mosaics in the dome considered the oldest in Sicily. 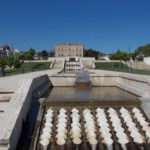 It is one of the biggest and most beautiful creations of art and Arabo-Norman architecture in Palermo, which began construction in 1165 by William I, at the time it was located just outside the city walls. The word ‘zisa’ comes from the Arabic al-Aziza, a term that means ‘the beautiful’ and that fits well to the magnificence of its structure and its lush gardens. Currently the Zisa has a fundamental importance as cultural center that houses the Museum of Islamic Art. 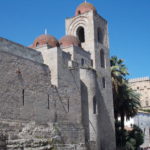 St. John of the Hermits

It was built by Roger II in 1136, but completely restored in 1882 by the Patricolo. And ‘typically Muslim art “the qubba” (humps) which is present in other churches as San Cataldo and St. John of the Lepers more or less the same period. We cannot describe the atmosphere inside the building where there is also a small cloister, one can only imagine what it might be such beauty of Muslim art drowned among exotic plants, still partially present, and pools of water that adorned these gardens … 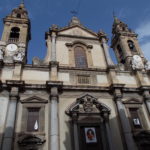 Renovated and expanded in 1300 from the old building was erected in 1640 with stucco statues, and two tall towers by Andrea Cirincione. . The interior is very spacious and austere in Billiemi stone and inside there are some important works of art from the Baroque period placed in niches. 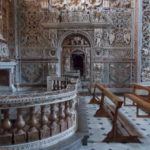 Church of Jesus or Professed House

An exceptionally beautiful church, the interior is a riot of marble, stucco, statues and frescoes. The church was built in the late sixteenth century to celebrate the prestige of the Jesuits arrived in Sicily in 1564. Adjacent to the Professed House church it is the Municipal Library 1760

Church of the Magione

Founded by Matteo D’Ajello in 1191, In the early nineteenth century, the church underwent a major restoration: the medieval building was transformed into a neo-classical. Next to the church is present, although very damaged by bombing, the Cistercian cloister, where you can see the remains of an Arab tower.

Beside the “Martorana”, it was built in 1160 by Admiral Maione of Bari, today is the seat of the Knights of the Holy Sepulchre.

Also in the same square as the “Martorana” there is the church of St. Catherine (1580), added to a great Dominican monastery of 1300. 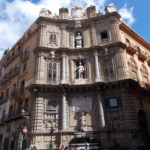 The Quattro Canti represent the old center of Palermo. It is a square of octagonal shape, formed by the intersection of Corso Vittorio Emanuele and Maqueda street. The four facades of the cantons ornate balconies, cornices, windows and niches, as well as fountains and columns represent four districts of Palermo: Albergheria, Head, La Loggia, Kalsa. At the center of each of these buildings are the four statues that represent those that once were the patron saints of the city: Cristina, Ninfa, Oliva and Agata. 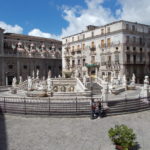 The Pretoria Fountain in Palermo

It is a work of the sculptor Camilliani (1554) for the Florentine villa of Don Pedro of Toledo and later bought by the Palermo Senate, from 1574 it is located in Pretoria Square, surrounded by splendid buildings, including the Praetorian Palace (seat of the Municipality of Palermo), and ancient churches (San Giuseppe dei Teatini and Santa Caterina). The scenic water machine elliptical-shaped plant is surrounded by an elegant balustrade within which are located the tanks, four staircases, statues depicting some pagan deities (Apollo, Venus, Diana, Bacchus, Adonis, Ceres, Hercules ), the allegories of the four rivers of Palermo, sea monsters, nymphs and animal heads. The nudity of the statues that decorate the Palermo pushed to rename it “fountain of shame.” The gate 1858 is the work of Giovanni Battista Filippo Basile. And it is considered one of the most beautiful fountains of Italy.

The Catacombs of Palermo

The underground cemetery of the Convent of the Capuchins, preserves the mortal remains about 8,000 mummified bodies of monks, famous people, rich people of Palermo and ordinary people. Deposed from the seventeenth to the end of the nineteenth century in the tunnels built under the convent and the adjacent church dedicated to Our Lady of Peace. The climatic conditions of these underground and the methods used by the monks to embalm the bodies, allowed that the bodies were preserved almost intact, and very recognizable. They are divided by gender and social category, but many also belong to the deceased friars of the Capuchin order. The first corpse dates back to October 16, 1559. 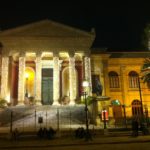 Maximum Theater is one of the most representative jewels of the city of Palermo. And ‘the largest opera theater building in Italy and third in Europe, after the Paris Opera and the Vienna State Opera. Imposing and elegant its construction began in 1875 by Giovanni Battista Filippo Basile. 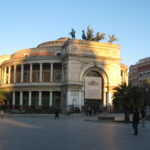 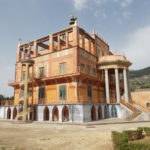 It was the residence of King Ferdinand IV Of Bourbon and his wife Maria Carolina in 1799 erected by Venancio Marvuglia. The appearance and furnishings marked by Chinese motifs are an expression of a taste of the time, and make it really unique. Absolutely to visit both the exterior, with its extensive gardens, and the interior rooms with very nice decorations. 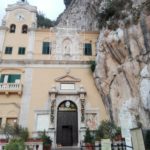 The Sanctuary of Santa Rosalia is placed on top of Mount Pellegrino (which among other things Goethe had called the most beautiful promontory in the world). The “Santuzza” is the patron saint of the city. The sanctuary is located inside a cave, where Rosalia lived the last years of his life.

It was built in the ‘600 the road crosses the old “Cassaro” (which the Norman Palace down to the port of Palermo, now Corso Vittorio Emanuele), dividing into four old districts (the “four corners” where the streets intersect) . It is a hive of palaces, churches and monasteries, with magnificent residential villas thanks to the transfer of the nobles from their fiefdoms. 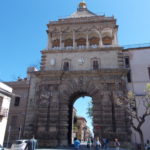 Erected in 1535 in memory of Charles V, it is located in the street of the “Cassaro”, close to the Norman Palace, and it consists of a massive building topped by a loggia and four Talamoni the bottom.

Porta Felice introduces Cassaro (Corso Vittorio Emanuele), the oldest and the main road of the city. The monument consists of two pylons spaced by the width of the road, was built in honor of Donna Felice Orsini, wife of Marcantonio Colonna, in the second half of the sixteenth century.

Erected in 1330 by Matteo Sclafani, it is an impressive building in Victory Square.

It is famous for the Charles V monument and it is located along the “Cassaro”. In the same square there is the Ugo palace, the palace Alliatas of Villafranca and the Apostolic College of St. Angelo.

It takes its name from the famous sect bloodthirsty executioners made by the people. Here we find the Church of St. Cosmas and Damian (1576) and St. Mary’s Church of Jesus (1660).

Ancient ridge of the old Arab quarter, starting from the popular market of “Capo”, it intersects several streets, courtyards and blind alleys, representing purely Muslim settlement model. It still maintains the popular character and commercial. In the street we find the Church of St. Augustine (1200) and St. Mark’s Church.

Built by the powerful family and exactly by Manfredi Chiaramonte in 1307, it is located in Marina Square (Villa Garibaldi). Next door is the “palace of the brand” and the church of St. John of the Neapolitans in 1526

From Revolution Square, with a beautiful fountain, arriving in Lincoln, there are the oratory of Peace, the church of St. Venera and the Conservatory of St. Catherine of Siena.