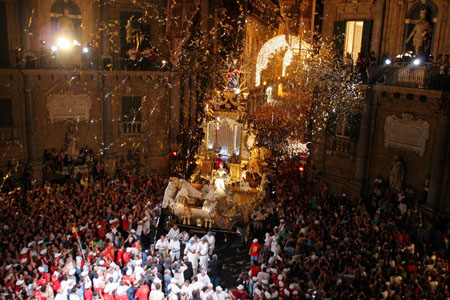 It was 1624 when the Black Death arrived in the city of Palermo by some ships from Tunis (ancient “Barbaria”), it was rampant among the population, and in vain we relied to patron saints of the city and four districts: St. Agata, St. Cristina, St. Oliva and St. Ninfa. And it is in these dramatic moments that the Holy appeared to the poor “saponaro” Vincenzo Bonelli (the ancient inhabitant of the “Panneria” district), who having lost his young wife because of the plague he was gone up to Mount Pellegrino with the intent to throw herself off the cliff, and it is at this point that she appeared before the splendid figure of a young woman pilgrim who dissuading him from his purpose, took him down with him to show him her cave and leading him in the old Church of St. Rosalia even then existing and also indicates her “pilgrim cell”, then she down with him from the so-called “valley of the pig” to the city, invited him to inform the Cardinal Giannettino Doria, Archbishop of Palermo, that the bones already discovered by a hunter in the cave, and set in the rock and which could be of St. Rosalia and which were kept in the personal chapel of the Cardinal, they were really hers and that, finally, were carried in procession to Palermo.

The Archbishop Giannettino Doria, July 15, 1624, along with all the clergy, and with the participation of the Senate and some elected citizens, carried the relics in procession, and it came that when they passed, the evil regressed. Palermo was soon freed from the plague and, in gratitude for so much benefit, the Palermo Senate voted the new Santa and decreed that in her honor, every year, the day of liberation to be remembered as the triumph of St. Rosalia, in the meantime become protector of the city.

Who is Santa Rosalia?

Rosalia was born in the first half of the twelfth century and belonged to a noble family, the father, the Duke Sinibaldi, was a vassal of the Norman kings, in fact Roger II had appointed him lord of Sierra Quisquina and Mount Rose. The mother, also noble and named Mary Viscardi, was related to the Norman royal family. The parents chose the name of pink flowers and lilies, pink and lilia, here’s the name Rosalia, symbolizing royalty and purity. As a girl, for its extraordinary beauty, Rosalia was chosen as a maid of honor to Queen Margaret, daughter of the King of Navarre, in the famous Norman Palace in Palermo.

The future of the beautiful and noble young man seemed marked, but when one day she would have to meet the noble and brave knight Baldwin, at the end of a noble marriage, here Rosalia looking in the mirror she saw the image of Jesus Crucified and at this point he had no doubts , she left the royal palace and seems to have retreated to the convent at two monasteries of Benedictine hermits in Bivona and Santo Stefano of  Quisquina, and only later she obtained the consent of the archbishop of Palermo, Hugh, moving on to the hermit life.

Rosalia decided to abandon even those humble conditions to spend her days in absolute solitude and prayer. She knew that the choice would forced her to live in the crevice of a rock, some that loneliness would be the custody of her purity. And so, to the death of Roger, she asked and obtained the permission to live as a hermit in the Sierra Quisquina, father’s fiefdom.

She took refuge in a small cave in the Sierra Quisquina. It was a dark and humid place, wedged between Mount Cammarata and Mount Rose, a piece of land hidden in the woods that the Saracens had called him Quisquina, from the Arabic “Coschin” that means “dark”. So Rosalia could spend in absolutely solitude twelve long years.

It is not clear the reason that led Rosalia to leave the Quisquina Sierra to isolate herselves in another cave on Mount Pellegrino, Some say that following a noblemen rebellion against the Normans all family assets were confiscated and even the father of the Rosalia Sinibaldi Duke was killed.

In 1625 the first celebration of the Holy relics were moved from the Archbishop palace to the cathedral, but over the years the route became increasingly long and complex to involve most of the city. The procession includes many brotherhoods, the oldest and most famous is the Brotherhood of Santa Rosalia of Sacchi, formed in 1635 and consists of barbers and cobblers (varberi and Scarpari).

The Triumphal Float represents the party, is the soul of the Feast, is the central part of the festivities. The parade along all the old Cassaro is the most impressive moment of the festival. The Float is shaped like a vessel, with stern an architectural structure at the top of which is hoisted a statue of Saint Rosalia at the height of her glory. The first wagon, built in 1686 has undergone several changes over the centuries, the Triumphal Float represents the metaphor of the desire of the city of triumphing over their ills as well as their “Santuzza” triumphed on the plague. Today the wagon is parked in front of the Palace of the Normans.

On the evening of July 14, the festivities reach the apex with a large “popular procession” the Float, at approximately 18:00, part of the Cathedral and along the ancient road of the “Cassaro” (Corso Vittorio Emanuele). Feature is the stop at the “Quattro Canti”, where the Mayor of Palermo, places flowers at the foot of the statue of Santa Rosalia, shouting “Viva Palermo and Santa Rosalia”. The Float continues through Porta Felice, arriving finally at Marina Square, where the bishop of Palermo by a message to the city. Resumed the path and through a good part of the old historic center is part of the Triumphal Chariot Cathedral, amid the cries of brotherhoods glorifying the “Santuzza”.

At midnight, the solemn festivities end to the “Marina” with fantastic fireworks.

Today the event has become a theater for all purposes, with spectacular light shows and acrobatic dances, representing the last days of the plague in Palermo.

Some neighborhoods symbol of this tradition, festively decorated by lights, become stages of the Feast, especially the Kalsa, Mount Pellegrino, and the Mount Pietà. And articulated several spectacular moments that illuminate the Festin inside the city.

During the celebrations they consume foods that are part of the popular tradition of Palermo, in particular: “the babbaluci” (boiled snails with olive oil, garlic and parsley), “pasta with Sardinians” (pasta with sardines) “u sfinciuni” ( sfincione), “u purpu” (boiled octopus), “u scacciu” (seed, walnuts, chestnuts and almonds), “a pullanca” (corn cob “),” u muluni “(watermelon).